Vacation at a craft beer festival 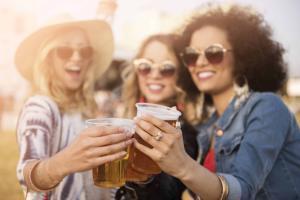 The dog days of August bring heat, mugginess, and lazy afternoons by the pool, and is the perfect time to celebrate craft beers with festivals taking place all over the U.S. and Canada.

Craft beers are becoming the new "wines", as different varieties with different palates are created, and beer and food pairings are expanding to beyond pizza and wings. The growing number of craft beer festivals reflects that change.

Craft beer festivals, like wine festivals, usually encompass a number of days and often many venues. Opportunities abound to learn about craft beers, sample them, try different food and beer pairings, and even enter contests for home brewing, all of which keeps attendees busy and entertained.

Even Key West is getting in on the beer festival action! August 30 to Sept 3, Labor Day Weekend, will see the 3rd annual Key West Brewfest taking place. The Southernmost Hotel Collection has teamed up with the Key West Sunrise Rotary of the Conch Republic, and all proceeds will go to benefit the Rotary Club and their charitable efforts. This festival includes seminars, brunches, football tailgate and pool parties, and of course their ever-popular Signature Event held on Saturday, September 1, 2012: Key West BrewFest Tasting Festival.

It's easy enough to find a craft beer festival near you: one such web address is http://www.craftbeerfestivals.com/ which provides a list of festivals and their dates throughout the U.S. With just a few weeks left to summer, one of these festivals is the perfect road trip to enjoying craft beers.