A drunken chicken is a good chicken! 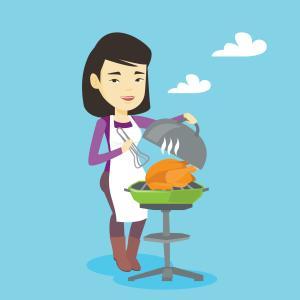 Canned beer has had a bad rap in the past: considered declasse for one thing. But beer in cans does have some redeeming features - and not just the fact you can cook beer can chicken with them. Sunlight, which can damage flavor, is not able to permeate the can, so the intended taste remains. As well, canning beer prevents excess air from being trapped inside, which can also affect taste.

Growing in popularity in barbeque season, the beer can chicken recipe  is second only to hamburgers and hot dogs! Why? Simplicity, of course. But more importantly, as people are becoming more interested in gourmand eating year round, incorporating new recipes for the grill is naturally going to follow. In addition, with beers becoming the new "wine", and flavors becoming more varied and exciting, simple recipes such as Beer Can Chicken become more diverse.

Basically, take a whole large chicken, wash it inside and out and pat dry with a disposable towel. Many brush a light coating of olive oil on the outside and then season with their favorite rub, but all you really needs is salt and pepper to taste. A can of beer is required, not a bottle which has a potential to crack in the heat.  One third of the beer must be removed from the can. What to do with the 1/3 of the beer never seems to be an issue:  naturally it must be tasted to determine if it is the correct flavor for the recipe.  It is, however, recommended you pour it into a glass, rather than swig it out of the same can that will be used in the cooking.

Once you have prepped the chicken and the beer can, you insert the can with the remaining beer into the butt of the chicken and balance it on the grill with the legs on either side and wings at the top. Now, it's important no direct heat be applied to the chicken. Therefore, place the beer can chicken onto one side of the grill with a temperature set to low. The empty side of the grill should be set to medium and the indirect heat will bake the chicken. The beer will warm also and froth up inside the can, flavoring it from the inside. So artisanal beers are especially effective for this recipe. The alcohol in the beer tenderizes as an marinade would. Bake the chicken for an hour to 90 minutes. And that is as simple as that.

Fire up the grill - try something new!