Could one company control almost half the beer in the world? 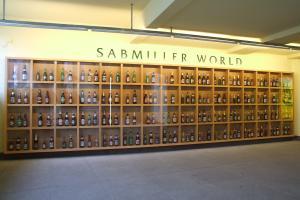 It seems that ABI (Anheuser-Busch InBev) is looking to do just that buy thinking of buying SAB Miller.

An article from chinchinjobs.com discusses what they know about the supposed talks.

SAB Miller, the world's second biggest brewer, is in talks to be bought by its bigger rival Anheuser-Busch InBev, according to reports.

The global brewer, based in London, could be the subject of an $80 billion deal according to Brazilian financial journalist Guilherme Barros.

The deal could create the worlds largest brewer by a large margin, with Belgium's ABI already commanding a 25 per cent share of global brewing.

The new entity would be maintaining a footprint in every global marketplace with near 50 percent stake in the US marketplace.

His report on the Sao Paulo-based website IG prompted shares in SAB Miller to rise by 120p to 2220 pence - an increase of 5.7%.

Both SAB Miller and Anheuser-Busch InBev have declined to comment.

What do you think, should ABI be allowed to buy SAB Miller? Is this good for the beer drinking community? What about the small guy?

Please leave your comments and like this article below.