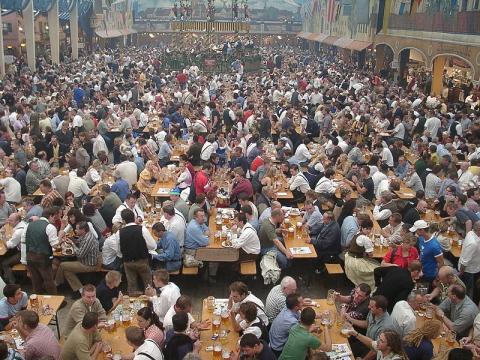 Well the 2011 Oktoberfest is over and good weather contributed to a record-breaking attendance.

The full story from chinchinjobs.com describes the event:

The balmy late summer weather was identified as the reason 6.9 million visitors, 500,000 more than last year, staggered around the cavernous beer tents in the German city.

They guzzled the 7.5 million steins, litre-sized measures of the amber nectar, despite a record high price of nine euros.

To soak up the beer, party-goers also consumed 118 oxen, one more than last year, 53 calves and thousands of chickens.

Several days of soaring temperatures boosted visitor numbers, organisers said. they also revealed the atmosphere was ''especially good'' with a sharp rise in the amount of non-alcoholic beverages consumed.

There were also fewer incidents of stein glasses being involved in violence between revellers and significantly fewer cases of alcohol- induced unconsciousness, the authorities said.

A police spokesman said: ''Happily, the upward trend of attacks with beer glasses did not continue this year. There were 58 cases, compared to 62 in 2010," the police added.

The event was the 201st anniversary of the beer fest, but only the 178th edition as the event was cancelled during two cholera outbreaks and World Wars I and II. It was also cancelled at times of economic and political crises.

Among the 4,750 items recovered at the event's lost-and-found office was a viking helmet, a megaphone and a pair of dentures.

If you have a chance to visit the beautiful city of Munich during Oktoberfest, make sure you go. Get your tickets early though. There are also lots of smaller beer festivals around Munich in other months, including the "Strong Beer Fest" at the Ruetberger Brewery which is usually in February or March.