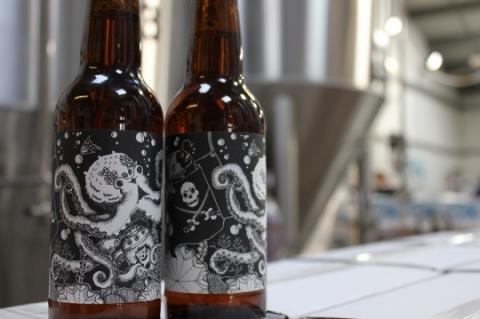 The brewers at BrewDog are at it again. This time they created a beer that was fermented on the bottom of the North Sea.

Why? To break an ancient curse on the Scottish shoreline.

Here is what they have to say on the BrewDog website about the brew:

BrewDog makes history with first ever beer to be brewed on
the ocean floor. Oh and we reversed and ancient curse too...... We are
kinda cool like that :)

This is Sunk Punk, a 7.1% IPA that has been fermented at the bottom of the North Sea in order to break an age-old curse on the Scottish shoreline. The idiosyncratic India Pale Ale is the first beer to be brewed underwater and contains some hardcore maritime-themed ingredients such as buckweed, distilled sea-salt, rum and mermaids.

Sunk Punk is an example of how beer can save the world. Not only does it provide an alternative to the fizzy, pathetic mainstream lagers peddled by giant monolithic breweries, it will be solely responsible for halting any superstition-related storms on our coastline. Britain, you’re welcome.

Scottish folklore states that to calm a storm, you should throw a bottle of beer into the ocean. According to legend, a fisherman with a witch for wife would go fishing every day and catch nothing. The witch would go to the shore and cast spells of luck to turn her husband’s fortunes. She then discovered that this was because he was actually drinking ale rather than fishing, so she decided to put a curse on the coastline that meant if he ever tried to come to shore, a storm would start and the boat would sink. Brewing a beer under the waves is intended to halt the storms and reverse the curse and teach the witch bitch a lesson.

We dropped a specially modified tank into the ocean and equipped James with scuba gear. The tank was specially modified to withstand the pressure at depth and also ensure no salt water could compromise the beer. We specially selected a spot on the ocean floor, 20 metres down, with a steady temperature of 10 degrees Celsius. This is the optimal temperature for a lager yeast. A special non-return valve complete with a line attached to a buoy on the surface was made so the CO2 could escape without the salt water getting into the sealed tank. The tank was anchored to the bottom and flew a menacing Jolly Roger flag in the prevailing currents.  We returned 2 weeks later to recover the tank which was towed into harbour before being hoisted back to dry land with the successfully fermented beer.

The unique label was designed by long time BrewDog friend, illustrator and ink evangelist, Johanna Basford. The hand-drawn artwork depicts the epic underwater story of this special little beer, all delicately crafted in pen and ink - kinda like a pirate's treasure map. You can find out more about the label here http://www.johannabasford.com/blog-article/302

You can buy some Sunk Punk here http://www.brewdog.com/product/sunk-punk

And we also have some Sunk Punk T-shirts also designed by Johanna which you can buy here http://www.brewdog.com/product/sunk-punk-t-shirt

We wanted to push brewing to its absolute limits and we think the Sunk Punk concept blows other beers out of the proverbial water. The bottom fermented beer is not designed simply to raise eyebrows, it is designed to elevate the status of beer in the UK. Our biggest goals are to make other people as passionate about craft beer as we are and to have a little fun along the way. Sunk Punk hopefully achieves both.

Creativity is alive and well at the BrewDog brewery, and if you go to the article they have some more pictures.