Google getting into the beer business 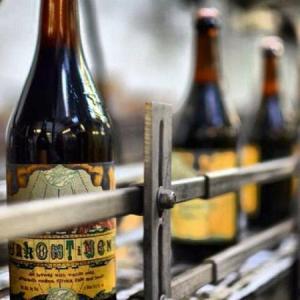 Yes it is true! Google has entered into the beer business by teaming up with Dogfish Head Brewery to create a beer that is supposed to represent the 5 continents where beer is brewed (I guess someone at McMurdo needs to start brewing soon!)

The beer is called URKontinent, and make no mistake, this was a marketing ploy by Google. That doesn't mean the beer isn't worth trying! Google claims to make no money off of this beer, but instead wanted to showcase some of their lesser known tools, like Google Sites, and Google Moderator. They used Google moderator to get suggestions for ingredients from around the world, and then have the Dogfish Head people make sense of them and craft the beer. The suggestions appear to be from Google offices on the five continents and according to Cameron Carling, Field Tech Manager at Google, they had over 100 ingredient suggestions. I also learned about Google hangouts which is a voice and video conferencing app that I have never tried.

The beer is a Belgian style Dubbel (a little on the high alcohol side at 8.1%), and has been created with flavor profiles from five different continents. It really does make sense to me that a Belgian style would be perfect for this beer due to the complexity, and possible conflicting aromas and flavors.

Once they narrowed down the ingredients, and Tim, the Dogfish Head brewmaster, made a tea from each of them to get an idea of what they would taste like. They also started with a (very standard) base of Pilsner, Munich and Chocolate Malts and Belgian Dark Candi syrup.

The other five ingredients included, Amaranth (a grain from South America that gives a nutty character), Green Rooibos ( from Africa, to give an astrinent, floral character), bog myrtle which is also called Myrica Gale, (from Europe and was used to add bittering), Wattleseed (from Australia, which imparts a chocolate, coffee, and hazelnut flavor that compliments the chocolate malt), and last, but not least, Hive Plex Honey (from California and a Google product, to impart a sweetness that keeps the dry finish).

Never underestimate the Maillard reaction (caramelization) to add flavor, and the brewers at Dogfish Head pan roasted the Amaranth to get a nice nutty flavor.

I am assuming that they almost went with a gruit style of beer, and only used hops ( a tiny 14 IBU's) for their preservative aspects, and it was mentioned that the hardest ingredient to find was the Australian Wattleseed since there is no commercial production.

The beer went on tap on September 27, 2011, at the Dogfish Head brewery and they are planning on bottling some of this special beer for sale in far off locales like your city. I can only hope that some comes to Las Vegas, and if it does, I will make sure to put up my review for you.